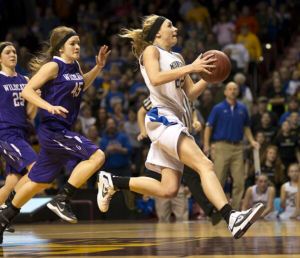 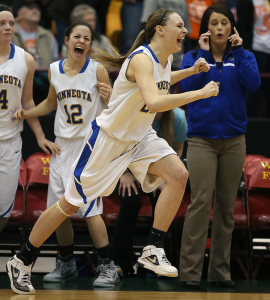 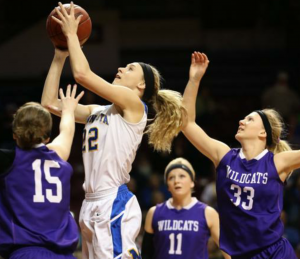 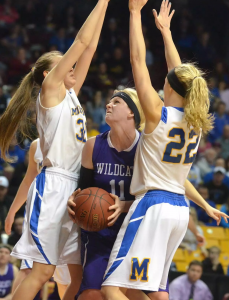 LQPV baseball state semifinal game vs Ely in Chaska, Eagles winning on a walk off by Jared Roilands hit to put the Eagles in the state championship game at Target Field.

RTR vs Ellsworth boys basketball section championship game at SMSU. RTR was looking to go back to state for the 4th year in a row, but Ellsworth and the Schilling brothers had other ideas, an overtime win for the Panthers. Most intense game from start to finish. RA was loud!

LQPV football beating powerhouse Albany twice (1994) during the season and none bigger than in the playoffs.

Canby boys basketball team state quarterfinal game with Fond du Lac going 3 overtimes!!! I was completely exhausted from broadcasting after that game.  Lancers fall in a heartbreaker 85 to 82

The list continues, but none bigger than the 2014 Minneota girls basketball team beating Goodhue in the final seconds of the state semifinal game at Williams Arena. My broadcast partner that day was Minneota boys basketball player Austin Buysse, Austin was interested in becoming a sports broadcaster and asked to help with the broadcast. He did a great job and added so much to the broadcast.

Over the years I had developed relationships with the Minneota coaching staff, parents, grandparents and the girls on the team. At state that year they made me feel like I was part of the team. They welcomed me into the Minneota basketball family which meant so much to me.  I appreciated coaches Johnston and Kockelman for there friendship and always having time for me so I can do my job. Parents invited me to dinner and we had fun times at the motel with the Minneota fans. The girls on the team were the best, always so kind, funny, and respectful and they represented there school very well. To this day i am friends with most of them, which i cherish.

That game had it all, loud cheering sections, lead changes, big three pointers, and drama at the end. Austin and I were seated in the upper deck of historic Williams Arena with the other radio stations, a very good view of the floor and crowd.

With the game tied 41 to 41 with 16 seconds remaining, Goodhue had the upper hand, they had the ball underneath their basket to inbound with a chance to break the tie and win it. The inbound pass was intercepted by Minneota’s Taylor Reiss and Taylor ran down the full length of the court and made the layup and was fouled, putting Minneota up 43-41 with 6 seconds remaining. Taylors free throw was missed and Megan Larson grabbed the rebound and scored making it 45 to 41 with just a few seconds remaining, final score Minneota 45 Goodhue 43! Sending the Vikings into the state championship game the next day.

That moment will always live with me forever; I see it in my mind like it was yesterday. There should have been a camera on Austin and I when Taylor stole the inbound pass, we were jumping up and down and grabbing each other while screaming and broadcasting at the same time, it was a  great moment!!

I’ve attached the audio of the ending of the game along with some interviews of the girls after the game. And pictures of that moment. Plus a short video made by Brian Jeremiason with our audio and photos of the play described.

So when people ask me that question about what’s the best moment you experienced while broadcasting, I tell them the last 16 seconds of the Minneota vs Goodhue girls basketball state semifinal game at Williams Arena in 2014!